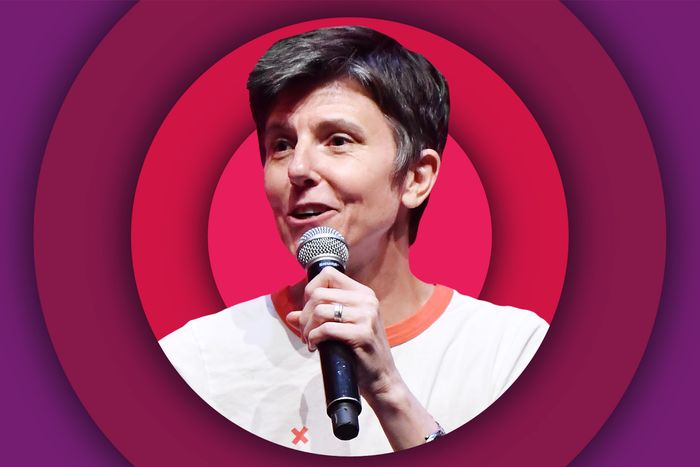 Next month will mark nine years since Tig Notaro went onstage at the Largo in L.A. and told the audience, “I have cancer.” The result was instantly legendary, eventually becoming immortalized in her album Live, and felt like a step forward in terms of what honesty could look like onstage: truth not rooted in confession but in the connection with the audience. But how do you follow that? What’s your next step when your audience grows exponentially, all because of a specific but not entirely indicative evening? Not to mention you have to now actually start treatment on the cancer you talked about in the set.

On Vulture’s Good One podcast, Notaro talks about working on that next special (Boyish Girl Interrupted), her new animated HBO special debuting on July 24, how she continues to push the art form forward, being great, being cool, being honest, and being — as determined by the internet — hot. Below, you can read an excerpt from the transcript or listen to the full episode. Tune in to Good One every Thursday on Apple Podcasts, Spotify, Stitcher, Overcast, or wherever you get your podcasts.

A Podcast About Jokes

I felt very confused and lost. I shared such personal information about myself, and people were talking about it like, “Oh, now she’s broken through and she’s this personal, darker comedian.” I remember feeling very much like I didn’t know who I was. I didn’t know who I was — just generally on the planet, but I also really didn’t know who I was as a comedian. I started to think, Oh, is that what I am? Maybe I am someone who shares personal stuff and dark stuff. I just tell the truth. And then I thought, But I also like silliness, and I like observational stuff.

I was scared to get onstage for a long time because there was so much pressure. I remember walking into a comedy club with my friend who was doing a set, and they all approached me like, “Oh, do you want to go onstage? It’d be an honor to have you onstage.” And I was like, “Oh, no, no, no, thank you.” I truly felt I was anonymous. I thought I was just a regular comedian going in with a friend of mine. And that was the first realization that that’s who some people saw me as. I was like, “I don’t have anything to say. I’m just going to sit here and watch my friend perform.” So I was like, Well, I’m not going to go into a comedy club again for a long time because there’s too much pressure. And then when I started to, I was just fumbling all around, and I could tell I was trying to say things to please the audience and give them what they wanted. But I was like, That feels terrible.

And then I went on the road. I went to Iowa City, and I was standing backstage. It was a sold-out theater. I was a bit nervous — and I don’t typically feel very nervous when I’m doing stand-up — because I was scared that I wasn’t going to be who they hoped I was. Then something just came over me in that moment before I walked out onstage. I thought, I have to give people a little more credit. There’s going to be people out there that have been following my career for years before this, and there’s going to be people that know me just newly because of Live, and people that maybe just want to laugh, that don’t need some dark, cathartic set.

So I really just let go of that moment right before I walked onstage in Iowa City. And man, was that the best choice, because they were such a phenomenal audience. To this day, a city I love going back to. I have some tour dates booked — I haven’t announced when — but that city has become such a part of my growth and a part of who I am, oddly, whether they know it or not. And I think they do know it, because I already have two shows booked in Iowa City for my return. I don’t hit every city and do two shows, but that’s who Iowa City is.

People say, “Oh, are you bummed that it was cancer that got you attention?” And for a while, I internalized that. I thought Yeah, it was kind of a bummer. Then it dawned on me that it was stand-up that got me attention. I was like, Wait a minute. No, I was doing what I do, and people were tweeting and blogging and talking about it. I feel thankful for that time; I feel thankful for myself, but I also feel thankful that I have heard directly from people how helpful it was to them. Although I know when I say I don’t want to remain that to everyone, I also kind of don’t care who I am to everyone. If I’m their favorite female comedian or their favorite gay comedian or their favorite comedian that talked about cancer or that I’m #HotTig from Army of the Dead, I don’t care who I am to you. I just feel thankful to have had the support that I had and that it was, in turn, supportive to other people.

It still feels very personal whenever I run into someone who was there. When I was in New York recently, somebody told me, “I was at your Largo performance, when you announced you had cancer.” And I’m always like, Oh my God. I feel a connection with that person immediately and feel like we went through something together, even if I don’t know their name. It’s a crazy thing. It was a different kind of show and delivery and experience. I was asking permission. I didn’t know I needed support. And that’s what I figured out more and more as time has gone on: I was looking for help. I certainly had friends and family, but my mother and my primary relationship were gone. It’s not too crazy to think that a dark theater where I do stand-up would be where I would go for comfort, having lost those people in my life.

I still really struggle listening to it. And it’s not because, you know, emotional reasons that I can’t relive that time. It’s like I relive that time over and over in my head from one dark moment to the next. I’m just glad people like it and get something from it, because I truly never want to hear it ever again in my life — because of the perfectionist comedian side of me, where I’m like, I’m glad you somehow got that out of essentially what should have been an open-mic set.

I certainly did not see that coming. [Notaro’s wife] Stephanie was more like, “Well, yeah. What took them so long?” It was more fascinating to me, because I’m in a movie with stereotypically hot women, to be the one people are talking about. To be fair, I know it’s because also I was green-screened into the movie and whatever. I also know that it was a curveball for some people to see me in that role — you know, grease-monkey helicopter pilot, smoking a cigar.

I also think it’s really interesting that male, female, gay, straight people responded to that, and that’s supposed to be not mainstream, which I’ve been told forever. To look like me, to be my age, to have my delivery — that’s not mainstream. That was the No. 1 movie in the world; it was the biggest movie that came out on Netflix ever, and people responded to a 50-year-old grease-monkey lesbian, you know, as hot. And no, I didn’t expect that. I wasn’t like, Yeah, that makes sense. I was just like, Wow, that’s really fascinating. And people should look into that, because Hollywood has said “No!”

I was told, “I’ve seen comedians like you. It’s like Margaret Smith; you’re going to end up a writer.” That’s verbatim what a manager told me. And I remember thinking, Oh, he knows what he’s talking about. I’ll probably end up going that way. But I love stand-up, and I’m going to do this as long as I can. And then once the wheels come off of that, then I guess I’ll go try and get a writing job. But the fact of the matter is I’m not the best writer. I have ideas and I have stories, but I need people to help me write scripts. It’s not my world.

I’ve had jokes and stories of mine animated. Greg Franklin, who directed Drawn, and I had talked probably 12 years ago. We went back and forth for a while, trying to work on that project together. But the truth of the matter is HBO wasn’t funding it, so it ended up being a hard sell for me…