It’s all about telling a good story.

On Hulu’s “Only Murders in the Building,” that’s the philosophy held by a trio of NYC apartment tenants who team up to solve the murder of a neighbor while simultaneously recording a podcast of their investigation. And telling a good story extends to the opening credits sequence, which captures the series’ mix of comedy, mystery and the characters’ sense of poignant longing.

The animated main titles opens with a woman walking her sweater-clad dog in front of the Arconia before offering glimpses of the tenants through their apartment windows. The camera zooms upward on its voyeuristic journey pausing at the rooftop during sunset before dipping back down to peek in on neighbors. Nighttime brings the three friends standing outside the front of the building, which has now become a crime scene. Bookending the entire sequence is the lady walking her dog, this time in the opposite direction.

The series, created by Steve Martin and John Hoffman, turned to Elastic, known for designing a number of opening credits, including ones for “Game of Thrones,” “Watchmen” and “Captain Marvel,” among others.

“The brief was this idea of a love letter to New York in a way and true crime and true crime podcasts,” Lisa Bolan, a creative director at Elastic, told Salon. “John really wanted to capture this romantic illustrative approach to New York, building on the magic of Hirschfeld and The New Yorker – illustrators who have abstracted New York in a way that’s beautiful and also speaks to these little glimpses of magic in the urban landscape.

“When you’re walking around New York City, whether it’s the steam coming out of a manhole cover or how when the sun sets, you’ll see a glimpse in between two buildings or a water tower shadow on the top of a building.”

Take a look at the “Only Murders in the Building” main titles below:

Bolan immediately pitched to have award-winning illustrator and comic artist Laura Pérez to tackle the look of the project.

It’s easy to see why. Pérez’s use of fluid lines, muted color palette and characters with haunted eyes capture the show’s eerie beauty and themes of loneliness, all set in a bustling apartment building.

The fictional Arconia is shot at The Belnord in Manhattan, which provided a template for the main titles, along with other iconic Upper West Side building such as the Apthorp. Viewers can see such details included, such as the ornate iron gates and even the bas-relief sculpture of two cherubs over the gate’s archway. 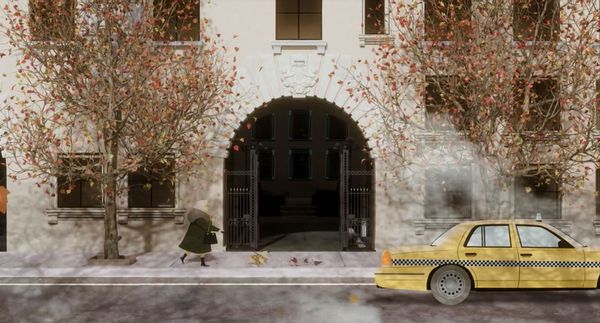 “I wanted to put her illustrations into the geometry of the windows and make them these apertures you can see through to see the isolation of the various characters and how the crime brings them together,” said Bolan.

Through these windows, each of the main characters are introduced: lonely actor Charles-Haden Savage (Steve Martin) making eggs for someone who’s no longer in his life, gregarious theater director Oliver Putnam (Martin Short) on the phone while drinking wine and solitary artist Mabel Mora (Selena Gomez) sketching.

While the opening credits emphasize a primary color palette, the color red is featured in particular.

“What came from the the creative direction was this sort of pink and factory gray kind of beginning and then as the sun sets have the color be golds and rich oranges. And as the sun sets, in turns red to suggest this idea of danger,” said Bolan. “And then as the fire alarm is tripped, we have those little lights strobing and the red flooding those those hallways and the stairwell.” 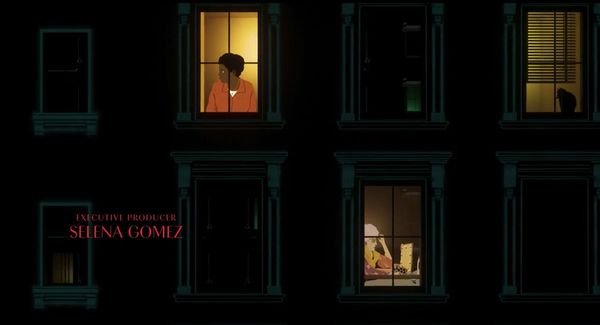 And even though we can see some people evacuating, other residents seen through the window aren’t budging.

“John had this wonderful story of a lady he would see tweezing her eyebrows in front of the window and makeup mirror for what seemed to be hours. So we featured tweezing lady,” said Bolan. “There’s also a lady who’s opening the curtains like, ‘What’s going on?’ Most of the people have left because the fire alarm is going off, but there are a few stubborn people who are like, ‘I’m not leaving. This isn’t a real fire alarm. These things go off every week. I’m not leaving.'”

As we see from the series, Charles, Oliver and Mabel barely acknowledged each other previously but became friends when they’re forced to evacuate to the diner across the street and realize they share a love for the same true crime podcast. When they discover that an actual murder has taken place at the Arconia, their friendship is sealed as they investigate possible suspects.

It’s why the second shot of the three of them together is so important.

“We thought about maybe putting them on the roof, and then eventually it made sense that they’ve just come back from the diner and they realize what’s happened,” said Bolan. “It makes perfect sense for that to be the moment where they all meet in the courtyard.” 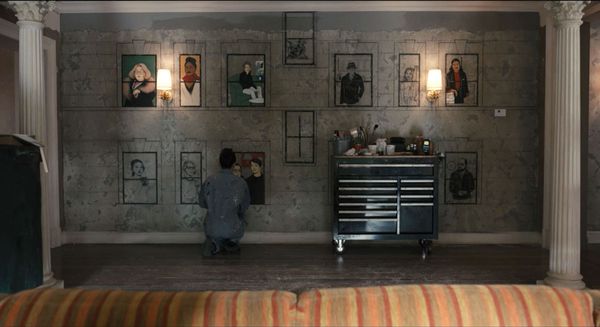 “Only Murders in the Building” Mabel’s mural (Hulu)

Pérez’s images became so integral to the identity of the show that they’re actually part of one character’s story.

“The coolest thing that happened for me was I suggested Laura and then she became the illustrator for the show . . . so she’s Mabel,” said Bolan. “She made the drawings [of Tim Kono] on the iPad. She becomes Mabel as the artist. Just everything she makes is magical. There’s movement to things, there’s leaves and hair moving, and it just I just felt like she’s the perfect fit for this because it’s a little dark, but still her, like Edward Gorey.“

Shortly after the series premiered, Hoffman told E! Online, “Within our gorgeous open opening credits, which we worked very hard on, there is a slight difference. An Easter egg is dropped, basically. A slight thing to pick up and find in each episode’s opening credits that points to a little mystery within that episode, or within the mystery at large.”

If Reddit threads weren’t clogged enough with theories and fans pointing out clues, this just added to the meticulous viewing and conversation. Here’s a breakdown of the location of each Easter egg, episode by episode. 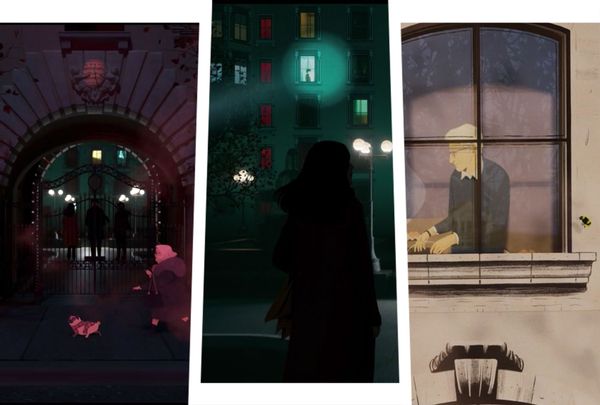 Episode 1, “True Crime”
Easter egg: Literally, an image of an Easter egg can be seen in the last scene of the opening credits after the camera pulls out of the front gate of the Arconian. It’s perched between the two bas-relief cherubs over the archway.

The decision about what the Easter egg was and where it would show up was a topic of debate.

“We we had a list that was really long for what they could potentially be. It was pretty long, but we probably had like three or four ideas per episode,” said Bolan. “And some of them we didn’t end up doing. You don’t want to disrupt too much, you want it to be hidden.”

Hoffman noted that at one point, an image of a whale was considered as an Easter egg as a reference to Mabel’s whale tattoo that is seen at the end of the pilot as she says in voiceover, “The secrets are the fun part. Who’s telling the truth? Who’s lying? What are they hiding?”

Episode 2, “Who Is Tim Kono?”
Easter egg: As the show’s title “Only Murders in the Building” flashes onscreen, two bright beams of light move around and pause on the building.

“They’re the flashlight beams that are on the building,” Hoffman told Salon. “It was never intended to sort of focus on any window. The flashlight beam was mainly there to represent young Mabel and young Tim, starting their sort of Hardy Boy-ing around the Arconia the way they…