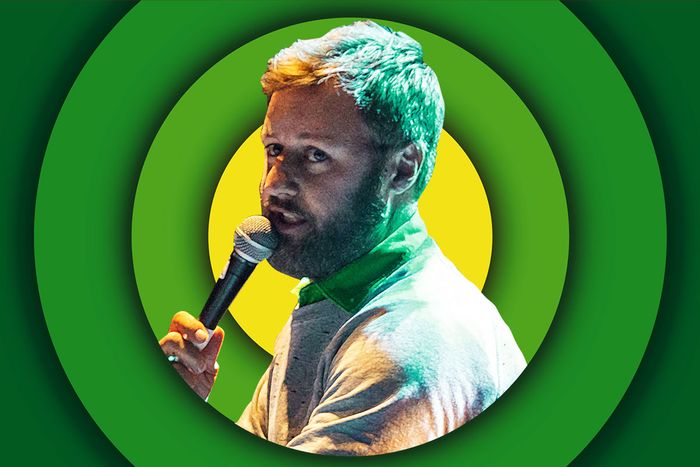 Sometimes people describe improv as walking a tightrope without a net, but when a stand-up goes onstage without even a glimmer of material, it’s kind of like walking a tightrope without the tightrope — there’s no line to walk, no path to follow. In 2018, Rory Scovel tried to see what happened when, for six nights, night after night, he stepped out into that void and had to just come up with a stand-up show. The result is the part stand-up special and part documentary Live Without Fear, which Vulture’s Kathryn VanArendonk wrote “will make you want to go see live comedy again.”

On Vulture’s Good One podcast, Richardson discusses Live Without Fear, Phish, connection, and growth. You can read an excerpt from the transcript or listen to the full episode below. Tune in to Good One every Thursday on Apple Podcasts, Spotify, Stitcher, Overcast, or wherever you get your podcasts.

A Podcast About Jokes

I find myself in this position of always wanting it to be art. I love watching a lot of stand-ups, but there are a lot of comics that I’ll just never be. As much as I love John Mulaney and I love seeing his wild success and seeing him on a stage at Radio City Music Hall, and as much as you get filled with jealousy over someone’s talent and accomplishment — I don’t mean a negative jealousy because I’m also an audience member, so I get to enjoy this thing that he’s made — but as much as I love all that and seeing it, you also have to sort of come to terms with who you are. Where do you stand as an artist in this field, and what do you want to make knowing you’re not going to write the way John Mulaney writes? So I went through a transition after that Netflix special, going, How can I grow out of stopping comparing myself to my peers or people that are above me who are succeeding, and quit saying, “Well, if I can’t do what they can do, then maybe I’m not good, or I’m not good enough?”

What led me into the special was wanting to experiment, knowing that a lot of people believe that my stand-up is always made up every time and that every single show is different. And it’s not. It might be different every time just because I move things around, or I might play with a joke a little longer in the middle than I usually would, or I’m willing to let the room dictate the vibe and everything. But it’s not an honest assessment, but I would never fight it because it makes me sound really cool. If people think that, why don’t I try that and see what that’s like? Because improvising in my stand-up is my favorite thing to do. What if I get rid of the option to go into material? Where will that take me? My best improv in my sets come from when my act is so concrete and in my opinion so good that I don’t need it. It’s because my confidence is so high because I have something to fall back on. So I wanted to work on, How do you create that confidence when you have nothing to fall back on?

I’m not a huge Phish fan. I like their concerts; I like the space of their concerts, I like the vibe of their concerts. I like that their setlist is always different. I like that they’re going to go into an improvised jam that could go for 25 minutes, which I know is easy to make fun of. I know there’s a lot of people that don’t like their music, and I get it. I just happened to see them at a young enough age when I was super high, and it then got burned into my mind like Oh, this is fun. And I’ve reconfirmed many times that I still do feel that way. I’ve seen them in the middle of a jam — a song that I don’t know, and I don’t know if it’s ended and the next one started, but my eyes are closed — and I am getting so much writing done in my mind.

This is why I like jazz so much: because I don’t know what’s next. My mind is not expecting it, and it frees my mind to just wander. My natural instinct is to wander towards either thinking about things that are very dark and depressing or thinking about things that I think are funny that I want to write down. If I’m lucky, it’s a very dark, depressing thing that I figure out how to make fun. That’s the best medicine.

I’ve always gone, Well, that’s music. Music is the medium that can do this for people. What is the way in which I could do that for stand-up? I’ve always been like, If someone were to tell me they were my number one fan and I played Madison, Wisconsin, and then we’re going to do five shows, how can I make it so that that person could come to five shows and really feel like they saw five shows instead of one show five times? That is definitely the seed of what I do want to accomplish — improvising and going, Well, let’s see if you can be a version of the Grateful Dead or Phish, but in the stand-up version where you can’t just jam out with a group. The group is actually the room, and you are playing lead guitar, and you have no choice but to keep playing for an hour and you don’t know what you’re playing.

I just want to try to give to people the thing I got from another medium. And honestly, what I just said is a little ridiculous, but the fact that it’s a crazy challenge is what drives me to be more creative, whether I ever hit that target or not. Having a crazy target has kind of led me to here.

All comedians, I think, of a certain level of skill, just can feel a room. I truly believe we’re all capable of it. But when you are onstage by yourself, it’s just very heightened because of the dynamic of that situation. But I really think that a lot of people, if they got over the fear of doing that, they would then tap into going, Oh, I can actually feel that that table of four in the back is giving this vibe. It’s a strange thing. It’s not necessarily just a facial response or a laugh, because you really can’t see most of the crowd. So connection is the starting point. That is truly a very powerful drug. And if you can control those vibes, and it doesn’t happen all the time, but when it does, oh man, you’re a Jedi.

My mindset when I go onstage is I want to have fun. If I’m having fun, I know for a fact it was a good show. And if I got offstage and you said, “You absolutely bombed,” I’d say, “No, I had fun. I know that I didn’t bomb because bombing is when I don’t have fun.” So, if I’m having fun, I gave the product. I gave what I could, and I know some people connected with it because I wouldn’t have had fun if I didn’t.

The clubs that I play hold 300 to 350 people. If I’ve sold 350 tickets, that means I’m performing for 350 strangers with different lives and different experiences. Not all of them are there because they’ve heard of me. So when you talk about something that gets everybody going, it’s honestly your greatest sense of hope in this world. Not that you know how to apply it and not that it’s working, but when you come offstage, you go, Fuck, I wish people could understand that a roomful of strangers can laugh at the dumbest, I mean truly the dumbest stuff. I have some very stupid moments, but yet a room can laugh at it and you just go, That’s proof. That’s proof that we’re not all these different people all the time.

I grew up in Greenville, South Carolina, which is obviously in the Bible Belt. It’s a state that has a very openly historic racial past. It’s definitely not a place that is like this big city that is widely diverse. It’s maybe not what people picture when they picture the south; they definitely picture it worse than what it is. But it also doesn’t mean it’s better or that it’s necessarily good.

I think about who I was when I was 19, and I don’t remember that person and I don’t know that I like that person. If I met that person, I’d go, “This dude is fucking annoying.” I don’t agree with his politics. I think he’s made racist jokes. I think he’s behaved in a homophobic way. And I now know, as an older person, it’s because I had no exposure or influence outside of the bubble that I lived in. So, I look…

Read More:Rory Scovel Wants to Be the Phish of Stand-up