According to the MEDIA MONITORS PODCAST LISTENER survey conducted between SEPTEMBER 20th-30th, the iHEARTPODCAST NETWORK retained its overall lead for most podcasts in the Top 200, STUFF YOU SHOULD KNOW moved from #10 to #5, THE BREAKFAST CLUB went from #32 last quarter to #15. New shows this quarter included ORAL SESSIONS WITH RENÉE PAQUETTE (#85) and THE COLIN COWHERD PODCAST (#90), both produced in conjunction with THE VOLUME, a sports-focused network launched in JANUARY and coproduced by COLIN COWHERD and iHEARTRADIO.

NPR dropped to #3, while SIRIUSXM moved up to #2. This rise might be due to SIRIUSXM’s acquisition of 99% of INVISIBLE (#62) and the launch of several SiriusXM branded shows, including COMEDY GOLD MINDS WITH KEVIN HART (#92), SIRIUSXM’S STITCHER ORIGINALS, EARWOLF, and LAUGH OUT LOUD RADIO have been combined as a single entry.

Combining AUDIOBOOM STUDIOS and AUDIOBOOM CREATOR NETWORK are in a tie with AMAZON MUSIC/WONDERY for fourth. AUDIOBOOM’s DARK HISTORY jumped from #22 to #7 this quarter, and CRIME WEEKLY jumped from #282 to #44.

Independent podcasts are using PATREON to distribute premium versions, which tallied 18 in the Top 200. Standard independent shows counted for another 16 of the Top 200.

THE JOE ROGAN EXPERIENCE returned to (#1). AMAZON MUSIC/WONDERY’s DR. DEATH (#23) moved up perhaps because of the release of the DR. DEATH TV show on NBC’s PEACOCK streaming service. Newcomers to the Top 25 are PRX/RADIOTOPIA’s True Crime podcast, CRIMINAL (#16) and JOEL OSTEEN’S RELIGION & SPIRITUALITY podcast, at (#22).

Comedy remains the most popular genre of podcast, Sports podcasts moved up to 17 with the return of active football and basketball seasons. Sports podcasts: FANTASY FOCUS FOOTBALL (#34) and FIRST TAKE (#49) from ESPN, Wrestling podcasts Talk is JERICHO (#66) from CUMULUS PODCAST NETWORK and JIM CORNETTE EXPERIENCE (#48) from MLW RADIO NETWORK and KAST MEDIA. 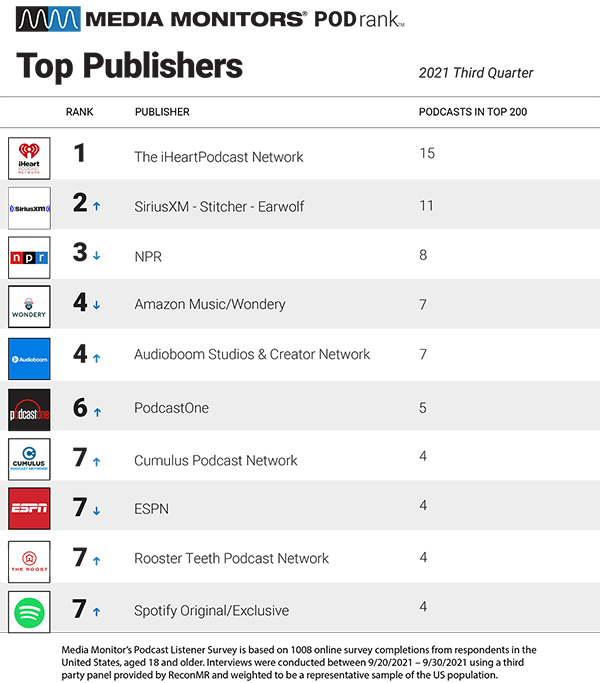 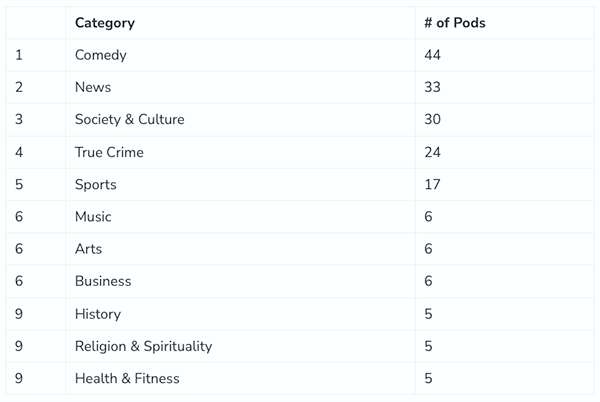