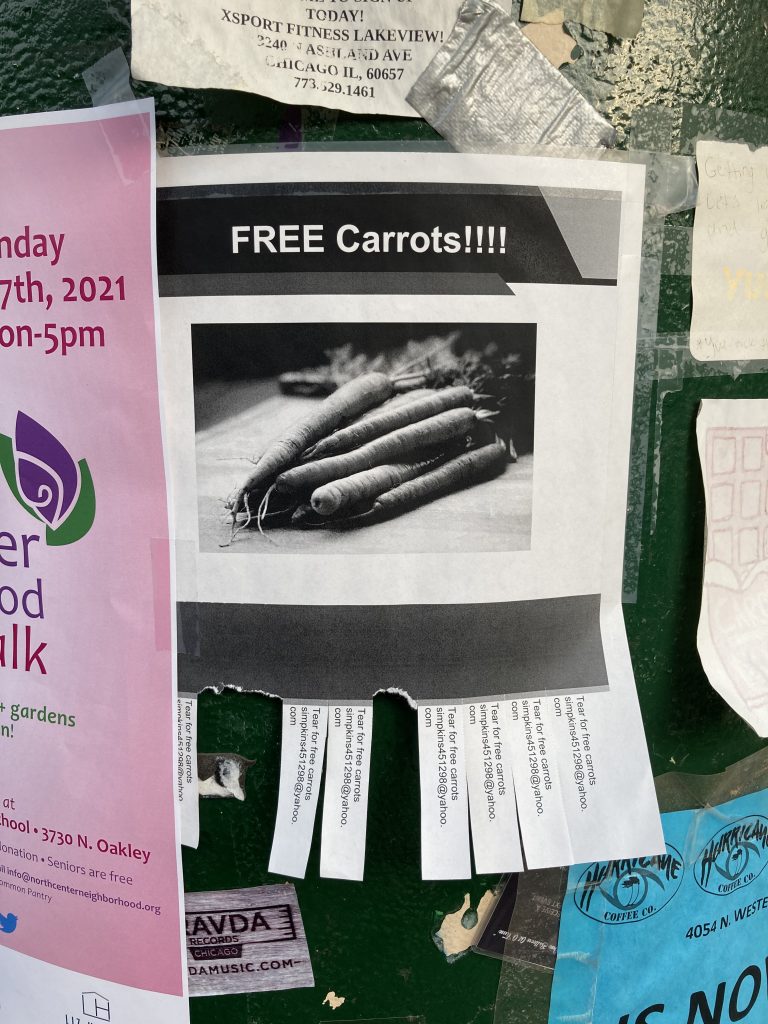 Okay, the last one’s mine. A shameless interloper from Lakeview, I decided to conduct an experiment, pledging free carrots, to find out what sort of folks were reading and responding to these postings. A postdoctoral fellow in neuroscience at UChicago and a CPA for a local startup. Of course that’s who. 2000-2100 W. Roscoe

Old Town School of Folk Music
Stories of former students going on to music glory echo the halls of the Old Town School of Folk Music. I’m a distracted student who won’t be going on to music glory, destined to repeat Guitar 3 forever. I go now for the teachers, most or all working musicians with talent and charisma to spare. They make the learning welcoming and memorable (“Every. Acid. Dealer. Gets. Busted. Eventually.”).

My favorite OTSFM moment is of the 2014 Seeger Sing Out! It was a weekend celebrating folk legend Pete Seeger’s life shortly following his death. Befitting the school’s open-door spirit, anyone from teachers to the public could step up and perform a song in the Maurer Concert Hall. I can still hear the souped-up rendition of “Where Have All the Flowers Gone” by a mother-daughter duo that knocked me cold.

More recently, the school has been embroiled in turmoil and conflict. At one point it was on the verge of selling its Old Town location on Armitage before a public outcry and series of protests—featuring song, of course—led the OTSFM board to walk back the decision. 4544 N. Lincoln and 909 W. Armitage, (773)728-6000, oldtownschool.org/ 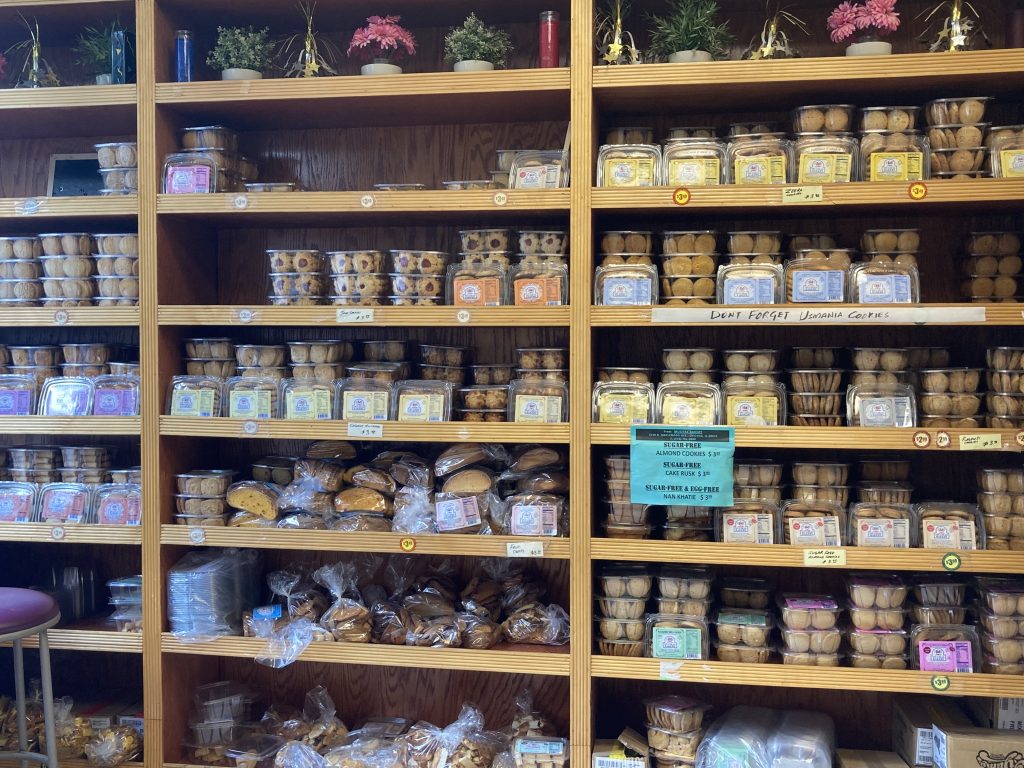 Mughal Bakery
Stop into Patel Brothers, or about any grocery or convenience store in the Little India area and you’ll find shelf space displaying cookies and biscuits from Mughal Bakery. This bakery, in a storefront off Devon, bakes more than 25,000 cookies a day to meet the demand for its products.

It is owned by the Syed family, originally from Hyderabad. Hyderabad is considered by some to be the cookie capital of the world, with its massive production and distribution. Mughal sells a variety of cookies and tea biscuits, including sweet and salty Osmania cookies, and Dum ke Roat, a traditional Hyderabad cookie made with saffron, one of the most expensive spices in the world. My personal favorites are the savory puff patties they serve warm: soft and flaky with a spicy beef, chicken or potato filling, for around two bucks each. 6346 N. Maplewood, (773)616-0202 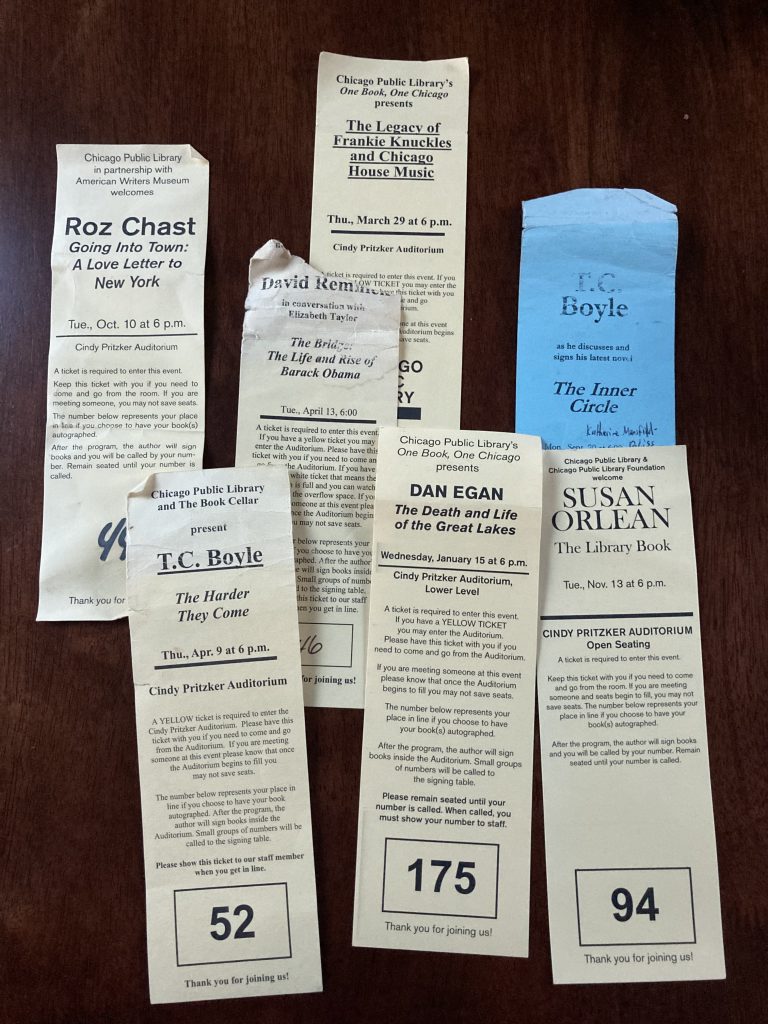 Chicago Public Library
CPL has been my home away from home since I first came to Chicago. Or more accurately “that special third place—beyond home and work,” as it’s described on CPL’s own website. Before life got disrupted, I was going so often I needed to travel to a new branch every now and then just to mix things up. Luckily there are eighty-some locations. I was also a semi-regular at the weeknight programming held in the Cindy Pritzker Auditorium at the Harold Washington Library Center. A great free way to spend an evening. I’m looking forward to getting back. HWLC at 400 S. State with neighborhood branches throughout the city, (312)747-4300, chipublib.org/

Harold’s Chicken Shack #62
When I first moved to Chicago, I found a job in Columbia College’s library. Closer in age to the student workers than full-time staff, I became friends with one of the students, a Chicago native, who took it upon himself to acquaint me with the city.

Lunch, he brought me to Harold’s Chicken Shack #62, on South Wabash, then between Warehouse Liquors and George’s Cocktail Lounge. He got the wings while I went for the Half White—which I corrected to wings on the next visit a few days later. But as a non-native Chicagoan I continued to opt for hot sauce over mild (and still do).

My friend said if I liked this location, wait until I try a legit Harold’s location. What qualifies as legit? I asked. Whether truthfully or to shock the bumpkin in me, he said the best Harold’s locations have bulletproof glass in them. Though I’ve visited a few others beyond #62, I have yet to independently verify this. 612 S. Wabash, (312)362-0442, haroldschickendowntown.com

But depending on your situation, they might be right. I went eighteen years without one. So the CTA figures prominently in my life. My way to work, my way to dates, my way to the Lakefront. Also, it figures peripherally. The first six years it was my neighbor, the tracks directly out back across the alley. I say you don’t really hear it after a while.

But its rhythms and rumble may have gotten in my bones. Not a few late nights I’ve involuntarily dozed on the train ride home, only to spring up at the exact moment the doors opened to my stop. Or maybe each stop has its own unique scent that a longtime rider picks up and can follow home?

My favorite is Western on the Brown Line. There I met my future wife for the first time outside the north entrance. She was taking the train up from Lakeview. Though, as it happened, weekend track work reduced Kimball- and Loop-bound trains to sharing a single track for a stretch between Belmont and Western, causing lengthy, lengthy delays. Not wanting to keep me waiting, she ended up taking an Uber. (888)YOUR-CTA, transitchicago.com/

Dick Biondi
Dick Biondi had the good sense to begin his career in radio in the time of Elvis and with the Beatles and British Invasion on deck. Biondi got his start in 1950s New York before moving to Chicago where he gained a national following on WLS-AM 890. I discovered his still-running show fifty years later in Chicago on WLS-FM, his playlist unchanged from when my dad grew up listening to him in Logansport, Indiana, in the early sixties: The Drifters, The Tornados, The Chiffons.

A tremendous thrill was when Biondi announced my name as part of the wedding party of my best friend. Now eighty-nine, Biondi is off the air. A documentary on his life is in production. When it wraps, there’s a chance I’ll have an uncredited appearance as one of thousands recorded at the 2018 Little Italy festival on Taylor Street taking part in a singalong of the Biondi original, “The Pizza Song.” 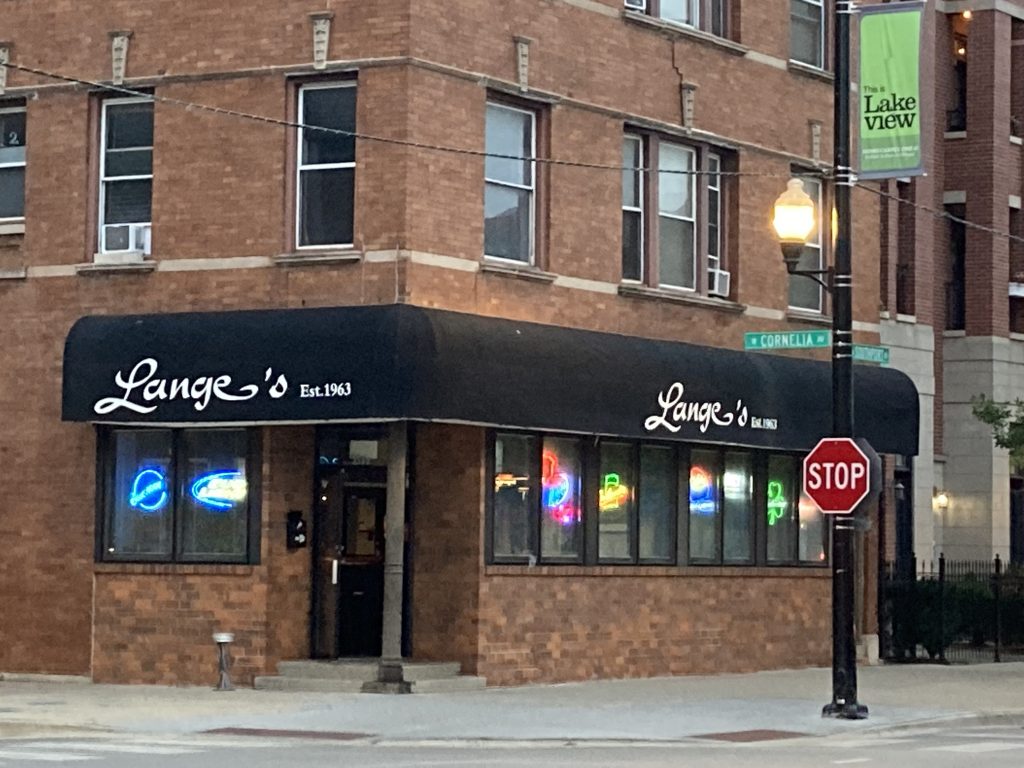 Lange’s
At the corner of Southport and Cornelia, Lange’s is the place I make sure to go after. After the evening’s obligations are fulfilled, whatever those may be. I know better than to start at Lange’s because then I’ll never leave Lange’s. All the action takes place in a single well-lit room with a square bar and a pool table. Sounds straightforward, but it’s deceptive. You can go four times and get four wholly different experiences depending on which side of the bar you sit. The side near the jukebox fills up first; it’s where you’ll meet and talk to strangers, and to monitor the jukebox for those deviants who would skip your songs by paying extra—although affixing a cocktail napkin with “Out of Order” handwritten on it near the payment slot to combat this practice should be done sparingly, if at all. The side against the back wall’s more…